Crop advisors have their hands full when managing the complex spectrum of insects in the potato ecosystem. FarmQA Smashes Potato Pest Management.

When it comes to potatoes, Hazen Palmer knows his spuds. He has worked with and managed up to 15 different varieties, and focuses on fresh market and process potato types. With an extensive background in entomology (see sidebar), there’s one thing he knows for certain: potatoes attract a lot of creepy crawlies. Controlling potato foes while also creating an environment for their allies is no simple task. FarmQA has proved beneficial in helping Hazen keep this all straight. 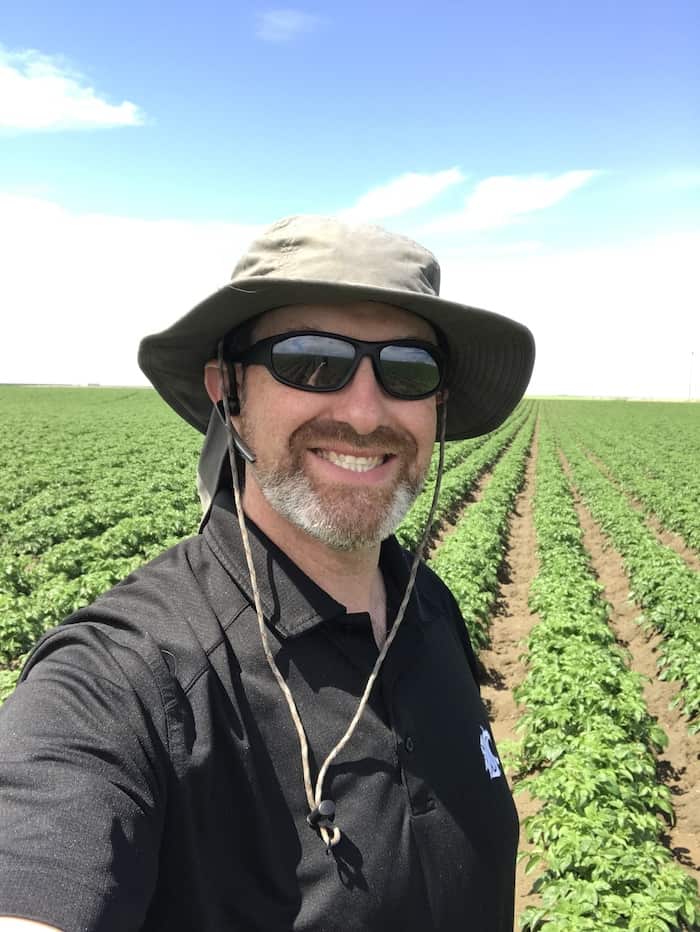 Hazen Palmer has twelve years of expertise as a crop advisor. He earned his degree from Washington State University in Agriculture Technology and Management and is currently working for Simplot Grower Solutions.

Hazen’s first role out of college was working with fertility products as a sales agronomist. He then worked for a private research farm that exposed him to the importance of entomology and pest management. The research projects involved testing different chemistries for pest management, insecticides, fungicides, and any other product that would be brought to market by large chemical companies. Hazen did research for new products that were being added to the marketplace but first needed data on efficacy on different crops.

The first years of Hazen’s career fostered an approach to crop consulting that is focused on research, using new chemistries in combination with pest management with an underlying focus on cost savings. Hazen helps his growers become data-oriented and helps them use that data to determine what products are most beneficial and provide the best ROI.

Crop advisors have their hands full when it comes to managing the complex spectrum of insects that make up the potato ecosystem. For example, there are more than 30 insecticides that could be used in a single growing season. The products used depend on the timing, the pest, the crop growth stage, and the spectrum of the pest—whether they’re adults, immatures, or if there are eggs present. Multiply those dependencies by the 10-12 different pests that could be present during the growing season and that’s a lot of data to manage. A balanced management plan is exactly what’s needed to provide the best recommendation for the grower. In addition to selecting the right product based on the type of insect and other contributing elements, Hazen also factors in his foundational pillars of financial and environmental responsibility.

Hazen understands that an insect field environment mirrors the importance of a soil environment. With soil, the focus is on fertility and microbiology. In the field, the insect population requires a delicate balance of predator and prey. Hazen advises on which insects are beneficial to a given crop and uses FarmQA Scouting to visually capture pest populations and mark where the problem areas are. Hazen’s knowledge of entomology, coupled with the way he tracks beneficial insect populations, bring a unique dimension to his crop consulting practice. For example, if a beneficial population is high enough, a grower can avoid a costly insecticide spray because the favorable ones can counteract the pests. Hazen has found that using FarmQA Scouting to document what is going on in the field has made it easier for him to provide these details to his growers.

Flexibility Built for the Details

As Hazen spent more time using the product, he soon recognized the benefit of generating his own scouting templates. Although he has worked with other scouting solutions, FarmQA is the first one he has used that offers the flexibility for users to fully customize the templates for what they are scouting. Next year, Hazen plans to increase the detail that he collects regarding beneficials and he will track them in a separate Scouting tab. He is also thinking about ways to slice and dice the data. For example, when aphid populations reach a certain level, he also sees high quantities of parasitic wasps and lay swing insects. With FarmQA, he can make correlations about what predators are present with what prey. This level of detail helps Hazen to understand what is happening in that field and make data-informed decisions.

Hazen added that his experience with the custom templates have opened his mind to all of potential ways that he can use FarmQA. “I have really enjoyed working with FarmQA,” Hazen said. “They have taken my requests and my questions and translated them into features.”

While we can likely all agree that there’s no ideal timeline for a pandemic to strike, potato growers were hit particularly hard because the onset of the pandemic in the U.S. coincided with planting time. As restaurants closed and the demand for potatoes declined, contracts and field allocations also were reduced. Hazen recalls that of all contract grower potatoes, there was an average reduction of 20% in acres planted. “Some growers had already incurred partial input costs for their fields and then opted out of the growing season due to the reduction in contracts,” Hazen noted. In other cases, growers opted for different crops completely. As a result, Hazen felt he could help his growers the most by helping them reduce costs.

A second hit came at harvest time. In July, when the potatoes were ready for harvest, storage constraints caused by the messed-up supply chain caused some growers to leave them in the field which meant five to six weeks of additional fertilizer, insecticide and pesticide applications. With a focus on costs, Hazen used FarmQA scouting and the data that he had collected to weigh the costs of inputs against the risk of not applying. He also worked with growers to stretch the length of time between spray applications. Hazen leveraged data he’d captured in FarmQA to fine-tune thresholds and make decisions on the fly with his growers.

There are several ways FarmQA has changed how Hazen works with his growers and his scouts. Currently, Hazen generates reports for his growers and then sends them via text or email, but he sees a day soon where growers will log into FarmQA and see the data in real time. Hazen is also making suggestions about what growers want to see.

Hazen leverages the merge feature within FarmQA Scouting to improve how he works with his scouts and up-level the finished report that he sends to his growers. The scout collects the initial findings for the field and then Hazen adds commentary in the summary. Using the Merge feature, Hazen combines his summary with the scout data into a single consolidated report for the grower. This streamlines the scouting process and frees Hazen’s time to add value in additional ways. It helps with Hazen’s time management, but also gives his scouts direction. Hazen also likes the ability to assign which fields the scout will go to on a given day and that he can check in with them within the app to see real-time progress.

Hazen initially looked at FarmQA Scouting when he found himself competing for business. He knew that to stand out, he had to add value that the grower would acknowledge. Hazen looked at other solutions, but he had very specific scouting needs. The templates that were offered in other solutions didn’t offer the same flexibility as FarmQA. For example, Hazen tried to generate a report with his criteria using a competing scouting tool, but to include the data he wanted resulted in a 13-page report. Hazen knew that wouldn’t be a good experience for his customers. “No grower is going to read through a 13-page report for a single field,” Hazen thought. “There has got to be something better.” That was two years ago. The search led Hazen to FarmQA’s website where he inquired about the functionality he needed. “FarmQA had everything that I wanted,” Hazen said. “I wanted to scout for 10-12 pests on multiple fields and I wanted to scout multiple sites in each field. FarmQA had the field boundaries on a map, it had a list of the pests that I was looking for, and the one-page report was something I could feel proud to send to a grower. It conveyed what was going on in the field right now and what we needed to do next.”

FarmQA had the field boundaries on a map, it had a list of the pests that I was looking for, and the one-page report was something I could feel proud to send to a grower.

Hazen is excited to continue the relationship with FarmQA and to see the product advance. When Hazen first started, he was sending scouting information in text messages with details like insect counts with a summary of the corrective action. FarmQA has become a foundational aspect to Hazen’s business and how he serves his growers, and he looks forward to how FarmQA will continue to evolve. One thing is for sure, he knows the team values his input.

Hazen acknowledges that every once in a while, he gets a “wild hair idea.” He likes that he can share it with Ben Munson, FarmQA’s sales and service rep, who also thinks “outside the box.” Together they can often figure out a way to implement what Hazen is requesting. Ben has never told Hazen “We can’t do [X].” Instead he adds the request to the roadmap and in some cases, he’ll report back in a few days that the feature has been added, a testament to the fact that FarmQA Scouting is fluid and improving on the fly. Last year Hazen requested a long text box to be added at the end of each report so that he can add commentary that summarizes what he saw and included on the report. Hazen said he is proud to send the completed report that includes a summary and the recommendations.

FarmQA is a streamlined tool that gives you the freedom to determine the data that you collect and make it a useful tool for YOU.

Never at a loss for words, Hazen had a few to share with anyone looking for a scouting app. “FarmQA is a streamlined tool that gives you the freedom to determine the data that you collect and make it a useful tool for YOU. The level of service is excellent and from my perspective, it is the best scouting platform that is out there. I am collecting pest counts and other scouting data; I am adding recommendations; and from the field, I am generating a .PDF of the finished report and sending it to the grower before I even walk out of the field. That’s amazing! Our time is our greatest asset and this tool has efficiencies built in. I would strongly urge anyone to at least give it a look. The FarmQA service makes it a homerun. It has been a homerun for me.”

See some of the latest features we've added to FarmQA.